How To Make Night Vision Goggles Yourself | Do it Yourself Guide

Do you need to have a look at how easy it is to install a Night Vision Goggles? The new generations are leading the way in technology, and the people are slowly adopting the latest technology that provides the best possible night vision experience to the users.

Well, that is also for a reason, you may feel curious. Read the complete article, and you'll be able to make a night goggle and get all the answers to your questions.

There are few instruments inside a vision goggle that you have to remember, such as photocathodes, microchannel plates, and phosphorous screens. These works as follows:

When you see an image, the light particles or photons get bombarded with a photocathode, and there is a release of electrons that occurs from backside. That means for each photon particle, one electron released. Then the electrons fall into a micro channel plate and act as a photo-multiplier and thus amplifies the electrons into various numbers, ultimately falling on the phosphorous screen, which again works as the photocathode, but in an opposite way.

That means it converts electrons into a photon and finally reaches your eyes with a compelling focus vision. But this is a condition when very little light is available, and this process is known as an image enhancement technology. But have you ever imagined what happened when there is no light? For that reason, there is another light vision technology called thermal imaging.

Before telling, let me ask you a straightforward question. Can you see all types of light? If your answer is no. Then you must know you can only see the visible light, not the infrared or UV or any other view of the electromagnetic spectrum.

When visible light is not there, the thermal imaging technology captures the infrared light and gives you a clear image. The vision is based on the quantity of heat generated from the object.

Why should you use googles?

To understand working principle of these vision googles, you need to think about how television works as it is pretty much the same thing, just on a much smaller version. Your camera on it that captures a video. This signal is sent to a video transmitter, which will broadcasts a signal. The goggles will pick up the signal.

To be more specific, the video receiver in the googles will pick up the signal and display it on the screen inside the goggles. Most FPV goggles are manufactured with an integrated video receiver or have the ability to plug one in via a module bay.

Many goggles also have a video input connected via an AV cable, or HDMI so you can actually connect it to your TV, or computer to watch TV, or have an immersive experience when playing on an FPV simulator.

Why night vision googles are green?

Are you already wondering, why the vision you get from such imaging technology is always green colored? Here I'll describe that. Your eyes are susceptible to a particular wavelength of light. And at night, it becomes more important to get a clearer picture than a colorful, but blurry one.

That's why the developers test every monochromatic light, which produces a focused perception and gets the green light. Yes, your eyes are most sensitive to the light of wavelength 555nm, which is green color.

In other ways, green is the only color that never hurts you even after constant focusing on one place. So, I think you fulfilled your curiosity.

How to make night vision googles?

After knowing the basics, now you're entirely prepared to build your night vision goggles. Therefore, I'm going to describe to you the construction process step by step. Before that, let's know the materials you need: 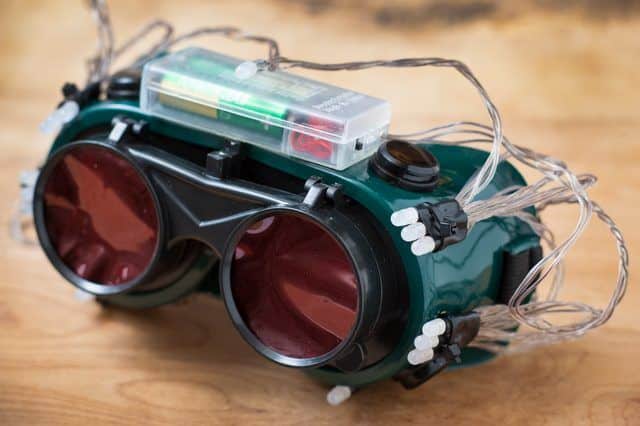 After collecting all materials together, let's start the building process.

First, cut the curtain according to your fit. Make two eye holes and another hole for the nose below the previous two. And then make some more holes for the power switches and battery plug.

In the next step, make a power supply by connecting components like the positive lead of battery with the monitor, LED, IR diodes. And the negative points of the monitor, LED and camera to one terminal of the switch. Join the cables to the camera and LEDs through an opening in the front of the crate. Associate the opposite finish of the change to the battery's negative terminal.

Now combine a battery charger to the array. Interface the video line from the screen to the camera. Turn on the switch. The screen should show a direct camera feed. The IR LEDs should illuminate white in the camera in a dull room. Spread the gleaming red piece with electrical tape.

Remove the adhesive backing out of the base of the vinyl foot from this screen. Attach on the underside of the box at the trunk. Paste or tape the battery from the picture, like into both sides of this box off from the screen along with eye-holes. Unscrew or take the negative projections of this camera. Don't cut or drizzle the black box with all the cameras or trim on the wires.

Paste or tape the camera into the front part of the carton. Glue the ring of LEDs alongside it. Press on the switch by way of a hole at the box's cap and then twist nut and the washer. Now examine the system. It should demonstrate the image by the camera and holding it should show that the LEDs are lit up, and just like a super flashlight, they should shine at the darkened. Plug-in the battery for a complete charge.

Wait until shadow strikes, and calmly reverse the switch. Now, look over the eye holes and see what. This impresses people once they figure out you assembled yourself! Spy onto your enemies, amuse people or see surprise people, monsters, escape the zombie apocalypse.

The entire process is pretty easy; you may face some difficulties at first. But with practice and knowledge, you will be able to make a great night vision goggle.

I hope that I have covered everything related to this topic, if you still have any question, let me know in the comment section below.

How To Make Night Vision Goggles Yourself | Do it Yourself Guide

How To Use The Night Vision Goggles On The Head Strap